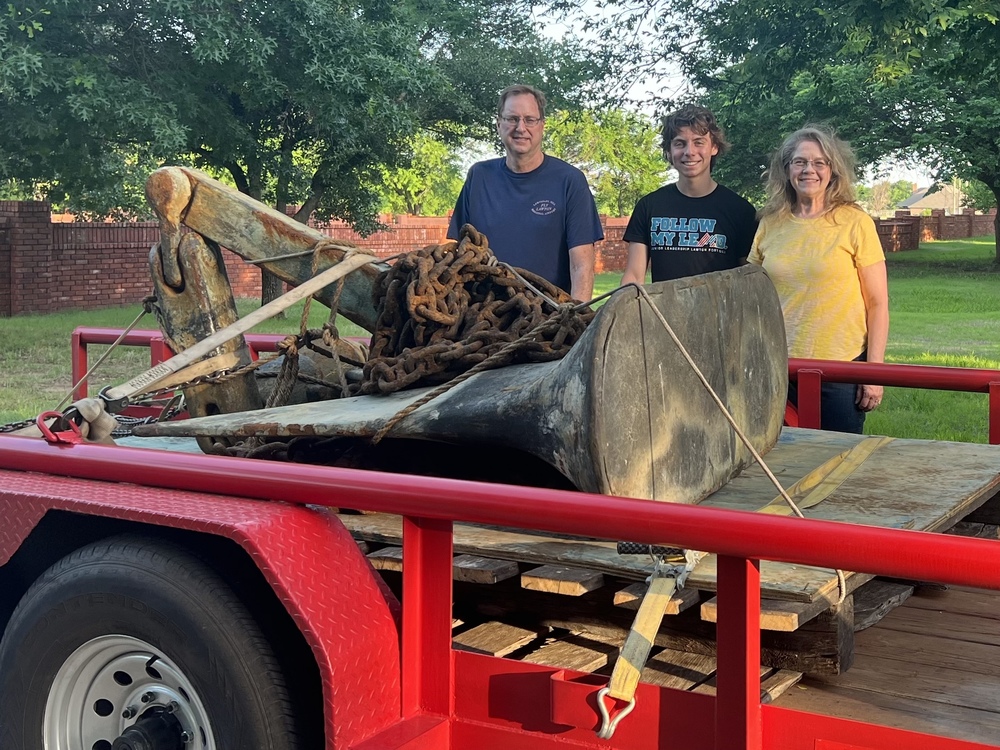 With generous support and assistance from Mark Glenn of Glenn Oil Company LLC and his wife, Sandy Glenn, Matthew Aguilar Jr. has successfully brought the USS OKLAHOMA CITY’s anchor and chain from Washington to Oklahoma.

The anchor and chain, artifacts which were recently released from the United States Navy, were originally expected to total over $15,000 in shipping costs.

Community member, and owner of Glenn Oil Company LLC, Mark Glenn, volunteered to pick up and deliver the artifacts himself, alongside his wife who documented the trip with photos and video, after hearing Aguilar Jr. discuss his project in a presentation for the Greater Ambucs.

The McMahon Foundation has agreed to donate $2 for every $1 that Aguilar Jr. raises. The funds which were originally being budgeted for shipping costs are now able to be redirected toward the preparation and construction phases of the project.

Community member Darren Duncan will be assisting Aguilar Jr. with the sandblasting process to prepare the anchor for memorialization.

Further, Matthew Aguilar Jr. was invited to attend a Decommissioning Ceremony briefing in Bremerton, Washington at the Puget Sound Naval Shipyard where he had the opportunity to meet with and give a presentation to the crew regarding his Eagle Scout project in early December.

Aguilar Jr. and family were also able to tour the sub on the anniversary of Pearl Harbor.

Matthew met the final commanding officer of the USS OKLAHOMA CITY, Commander Sean Welch, who presented him with one of his own challenge coins.

Be on the lookout for more information on this growing project, and see below the original story for more photos.

Within the next year, MacArthur High School junior and current Life Scout Matthew Aguilar Jr. plans to create a large memorial display consisting of artifacts from the USS OKLAHOMA CITY – a US Naval submarine set to be inactivated in December.

Aguilar Jr., who has been involved in scouting since 2011, has been in correspondence over the past year with representatives from the Navy in search of artifacts to display in a naval memorial to be constructed at Elmer Thomas Park in fulfillment of his final project to become an Eagle Scout.

The display, to consist of the anchor and chain from the USS OKLAHOMA CITY, is Aguilar Jr.’s final project to complete before being awarded the rank of Eagle Scout – a prestigious rank in the Boy Scouts of America.

Aguilar Jr. shared that his cousin, CAPT. Robert Aguilar, was able to get him in touch with the historical division of the US Navy – the main point of contact for artifact requests for monuments.

“I went through a couple of different people before I made contact with Mr. Curtis Brown who is the Naval Sea Systems Command (NAVSEA) PMS 392I Lead POC for Navy Submarine Artifacts Requests,” Aguilar Jr. said.

Originally, Aguilar Jr. requested the sail from the USS OKLAHOMA CITY, but was advised that the sail would not be available until 2029.

“That would be a problem since I need to complete my project by 2022,” Aguilar Jr. said. “Fortunately, Mr. Brown informed me of the anchor and chain as an alternative piece that would be available much sooner”

The road to become an Eagle Scout has been a long one for Aguilar Jr. – having begun his project in November of 2020, but his original idea for constructing this monument has been around for far longer.

“The idea for my Eagle Scout project actually came from viewing an article in the BSA Boys Life magazine in 2017,” Aguilar Jr. said. “I read a story about another scout who built a monument/memorial for his project with a piece from the twin towers from the 9/11 attack.”

Now that Aguilar Jr. has acquired the anchor and chain, he is preparing for the next phase of his project which requires funding. Due to policy, the Navy is unable to fund any portion of the process, so Aguilar Jr. needs to pay for each step along the way.

Funds acquired will be used for direct construction of the project, including the concrete pad and a wall of granite engraved with the names of servicemen from the USS OKLAHOMA CITY, as well as the shipping costs to get the anchor and chain from Washington state to Lawton, OK.

If the anchor and chain is in need of sandblasting or sealing procedures to preserve them appropriately, funds will also be used for those processes.

The target amount for the fundraiser is $50,000. Those who wish to donate should contact Pastor Bill Schneider at St. John’s Lutheran Church - where the donation account has been set up - and state that they are for Matthew Aguilar’s Eagle Scout Project. All donations are tax deductible. 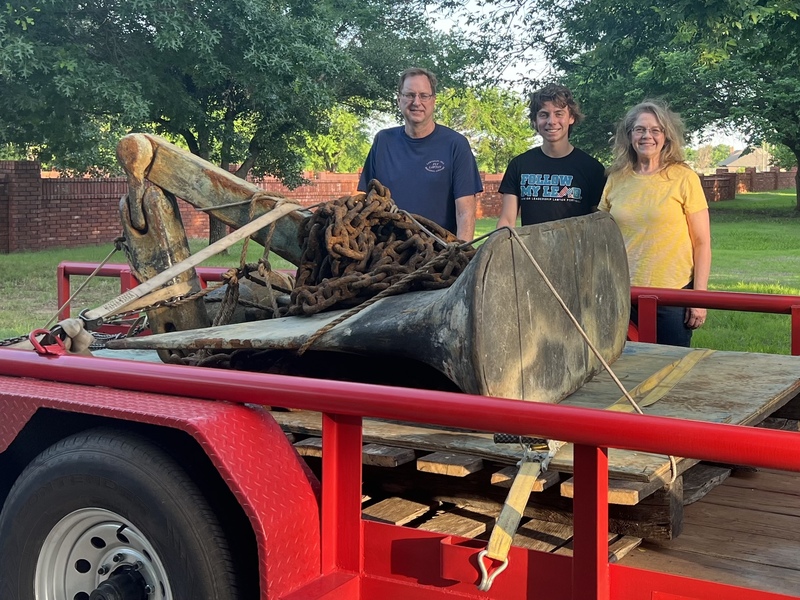 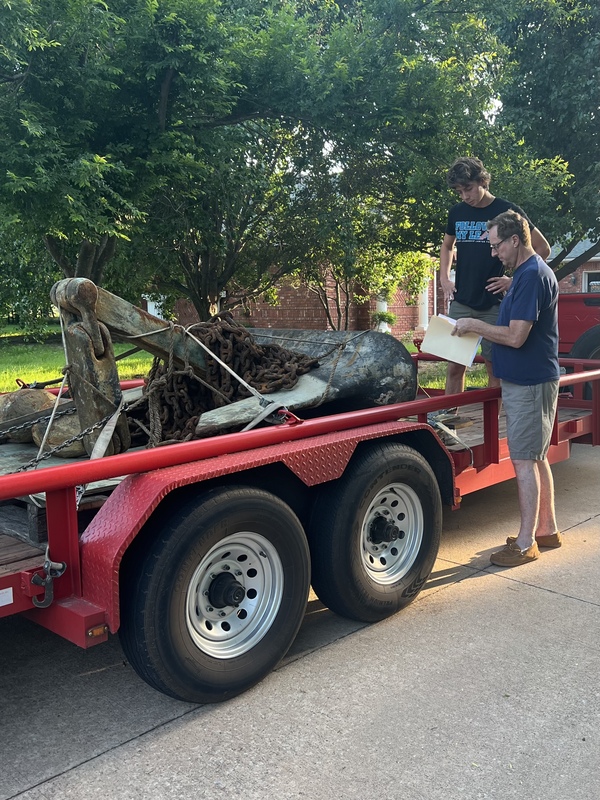 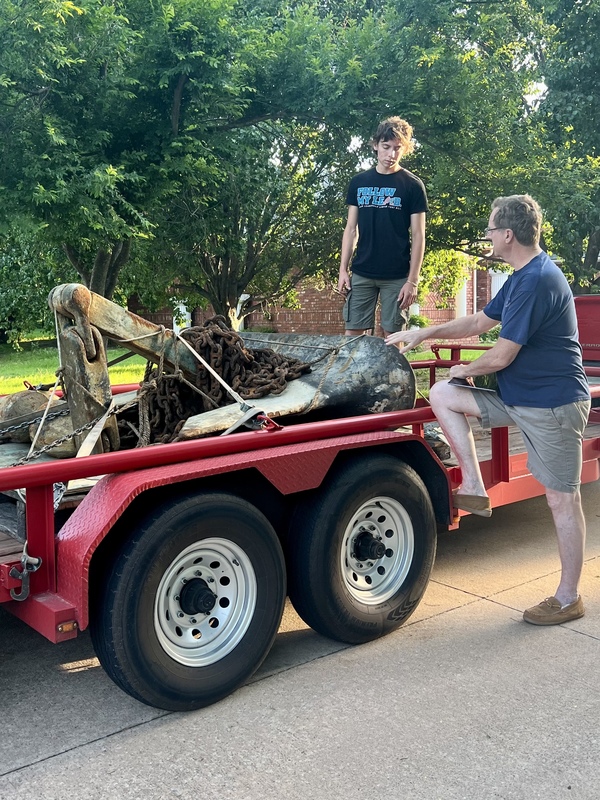 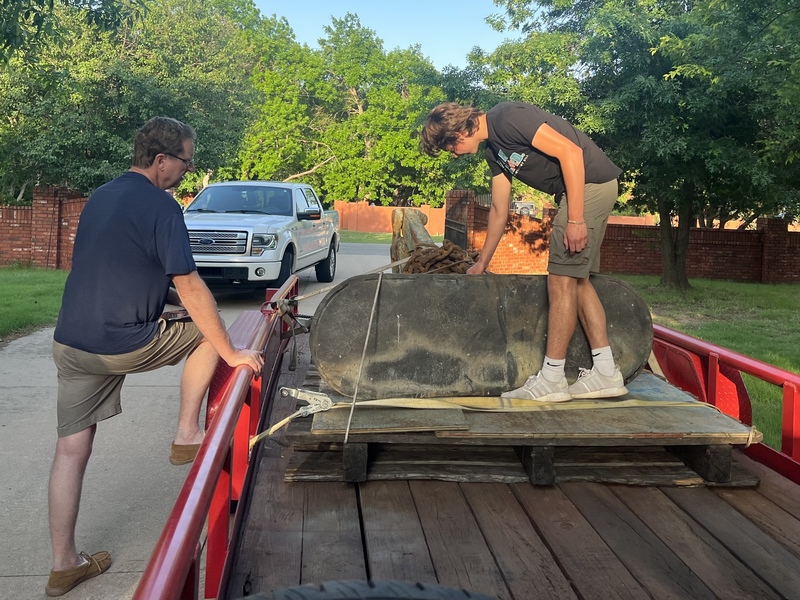 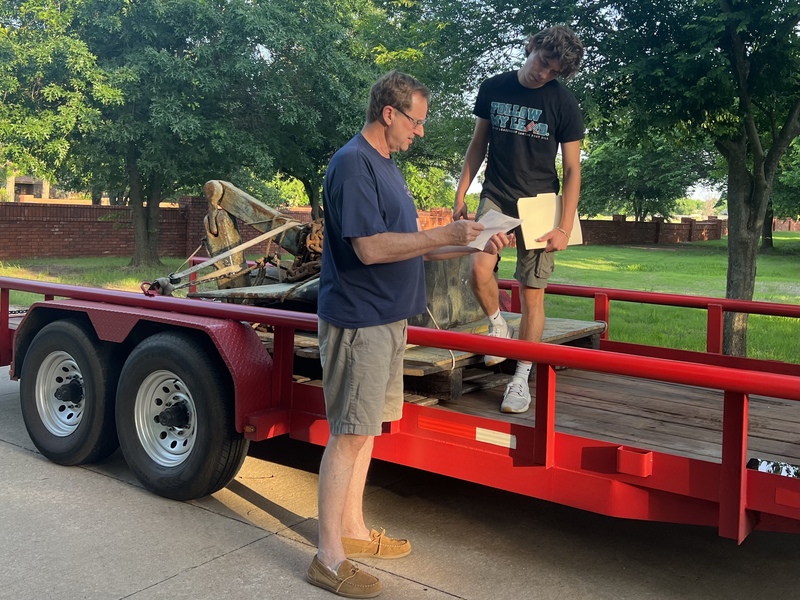 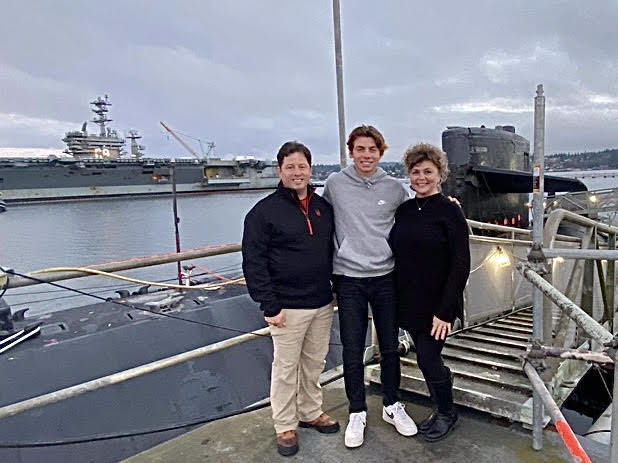 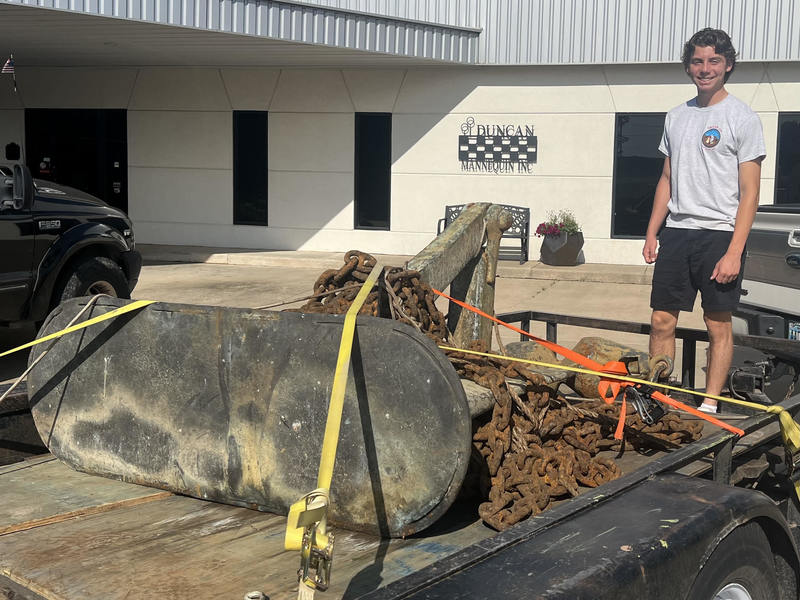 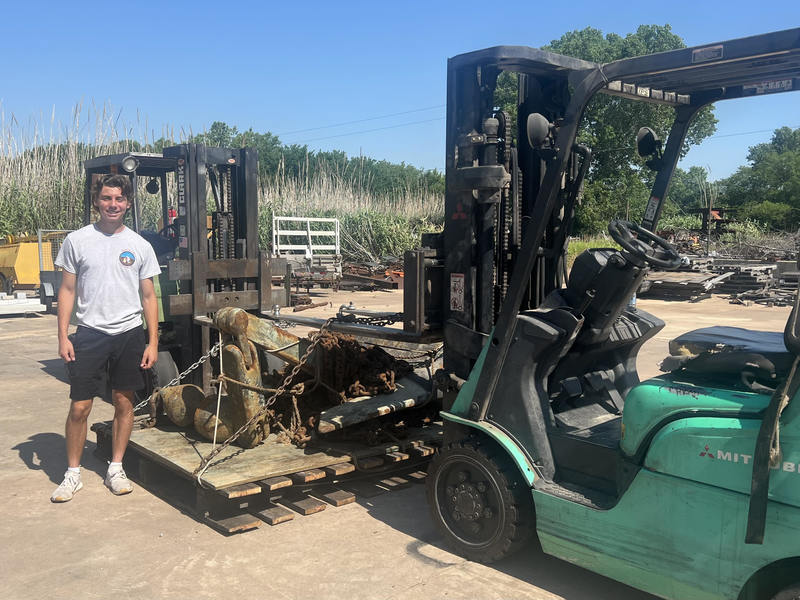 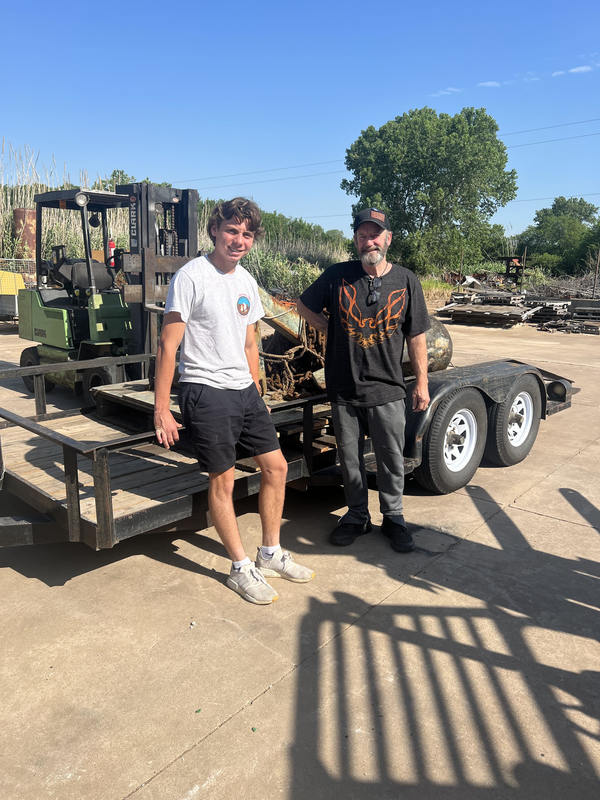 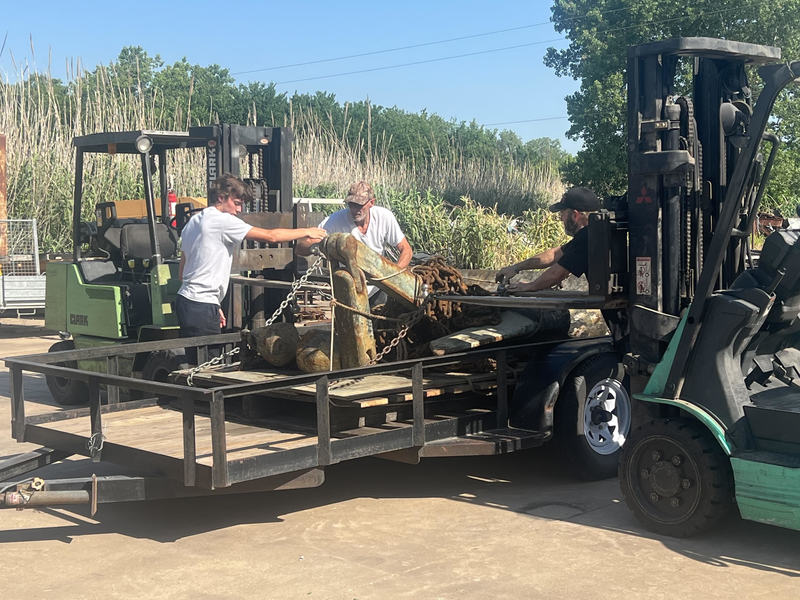 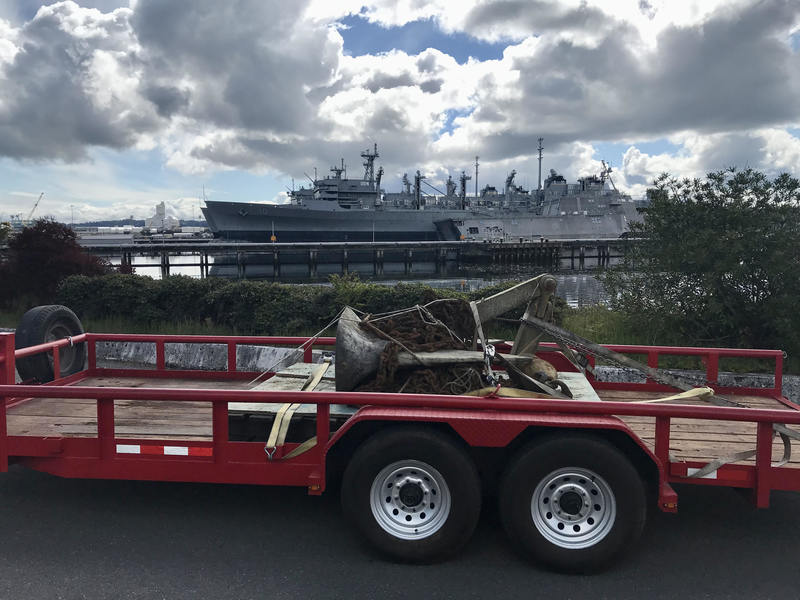